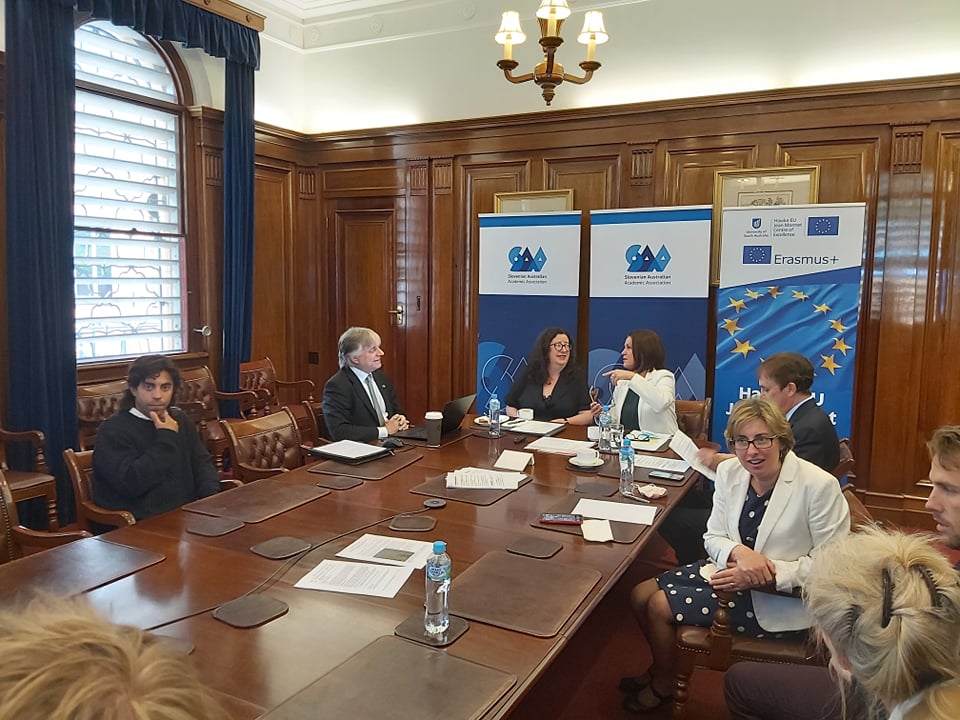 On Friday, the 19th of November 2021, the 5th Annual SAAA Conference: “Diversity and Innovation: Celebrating Slovenia’s 30th Anniversary”  was a blended conference livestreamed via Zoom and in person in Adelaide at the Law School Board Room, in the Law Building, University of South Australia West Campus in collaboration with The Hawke EU Jean Monnet Centre of Excellence at the University of South Australia.

The 5th SAAA Conference celebrated the 30th Anniversary of Slovenia’s Statehood and its ongoing achievements in the field of Environmental Awareness and Gastronomy. The event also acknowledged Slovenia’s vital role in the Presidency of the Council of the EU, occurring in the second half of 2021.

The conference was opened by a heartfelt video message from Ms Tanya Plibersek MP, Member of the Australian Parliament, Shadow Minister for Education and Shadow Minister for Women, Federal Member for Sydney. Opening addresses were also given by Professor Anthony Elliott, Dean of External Engagement and Executive Director, Jean Monnet Centre of Excellence and Network, University of South Australia; H. E. Dr Helena Jaklitsch, Minister for Slovenians Abroad, Government Office for Slovenians Abroad; Mr Adrian Vatovec, Honorary Consul of the Republic of Slovenia in Adelaide; and H. E. Mr Jurij Rifelj, Ambassador of the Republic of Slovenia in Australia.

The Conference brought together more than 70 registered participants from around the globe, including from the US, Brasil, UK and Slovenia. Participants from Australia came from all major cities such as Perth, Hobart, Darwin, Melbourne, Sydney, Canberra, Brisbane and the host city of Adelaide.

Attendees had the opportunity to listen to three keynote speakers who provided a diverse series of topics. Associate Professor Alice Gorman, Flinders University, on “Islands in space: the visionary science of Herman Potočnik Noordung” and Associate Professor Laura Grenfell, The University of Adelaide, on “Protecting the Vulnerable during COVID 19″ attended the event in person, while Mr Ivo Boscarol, the CEO and co-owner of Pipistrel was interviewed live from Slovenia on “Thirty years of revolutionizing aviation” by Ms Mateya Slobodnik from the Slovenian Australian Chamber of Commerce.

The Slovenian Australian networking conference included morning Annual General Meeting for SAAA members, afternoon sessions and a conference dinner at the Australian National Wine Centre in Adelaide and online. In the afternoon, participants heard from academics about their work, how they collaborate with Slovenia and where lay the challenges and opportunities. Non-government and government organisations were also presented. Online networking during the lunch break was organised by VTIS. Participants also heard from Slovenian Australian PhD students chaired by Dr Louis Everuss from the University of South Australia and the American Slovenian Education Foundation (ASEF) Junior Fellows 2021 moderated by Dr Jurij Karlovsek, one of the ASEF Professors for Global Fellowships.

The attendance was in particular open to academics, researchers, students, entrepreneurs, and all organisations who are interested to learn the current knowledge exchange between Slovenia and Australia upon their respective regions.

Catering for the conference was provided by the Slovenian Club Adelaide. Attendees were treated with delicious food during the day including potica, plum filled krofi and Slovenian wine.

The 6th Annual SAAA Conference 2022 will take place on Friday, the 18th of November 2022 in Perth and online, organised in collaboration with VTIS, SloAusCham and a guest co-organiser the Slovenian Brazilian Academic Club.