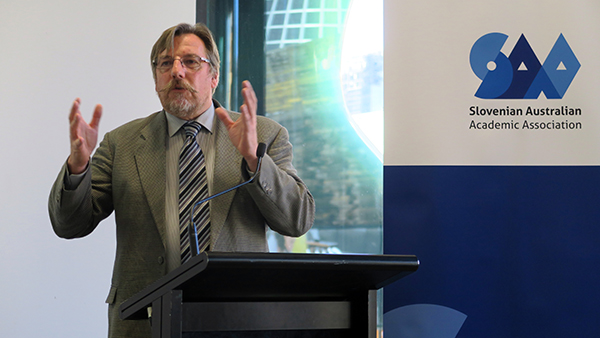 Small community, big impacts; The challenges and benefits of participating in multicultural activities to maintain presence

Tasmania has been settled for well over 30,000 years. At the time of European settlement (1803 Risdon Cove) there were up to sixteen separate indigenous languages attributed to at least four different language groups spoken across six nations. If we take language as a proxy for culture then the striking possibility is that Tasmania has been multicultural for a very long time.

European appropriations of Tasmania from 1803 on have led to a new multicultural mix. Slovenians arrived into this new mix in one or two waves mostly as part of Australia’s post world war two European migrant worker programs. Census data suggests there were 67 Slovenes in Tasmania in 2011. At present there are approximately 180 Tasmanians with at least one parent who was born in Slovenia. There is little to no continuing migration of Slovenians to Tasmania and this has led to one visiting social scientist from Ljubljana University (Ksenija Vesenjak 2004) documenting that “…there will be no Slovenes in Australian Tasmania in less than 50 years”.

Despite their small numbers, migrant Slovenes and their children have been highly visible. They have contributed greatly to Tasmanian culture including to making pioneering efforts in hydro, forestry and mining industries and continuing into accomplishments in literature, science, sports, filmography and musical achievements.

As the original Slovene migrant cohort ages it is increasingly difficult to maintain cohesiveness as a minority community. By actively participating in the Multicultural Council of Tasmania, Slovenes have been able to maintain a constructive and visible cultural presence in Tasmania despite reductions in their own social and communal activities.

Fred Pribac was born in Ljubljana but for his first birthday in 1960 he was brought to Australia by his parents Humberto and Zofija (Bert and Sophie). His first language was Slovenian, second Italian and third English. He is still OK at speaking English.

From his earliest memory he has had a love of science and eventually, in between frizbee throwing and banjo playing, he managed to became a physicist. He has worked on environmental problems as an experimental scientist, scientific programmer and consultant with CSIRO for over twenty years. Currently he is the Climate Change Officer for Clarence City Council.

He loves folk music and folk cultures of many sorts and has received recognition for his work in the preservation of Tasmanian folk culture. He is a board member of the Multicultural Council of Tasmania and represents the Slovenian Tasmanian community to the council.