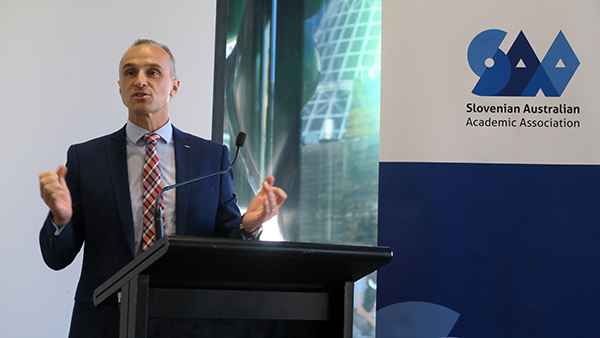 The experience of the Slovenian in Antarctica

As a Slovenian and Australian Citizen and also Managing Director of William Adams Cat, Eddy Kontelj recently spent more than 8 weeks in Antarctica and completed a 25 day traverse delivering food and vital supplies and resources to the French and Italian run Scientific Research Station – Concordia in Dome C, Antarctica, one of the coldest places on earth.

Eddy talks about his links to Slovenia, articulate the important work being done by the company he is leading, Caterpillar Dealer William Adams, and present, demonstrate and walk us through the significant challenges and opportunities in Antarctica.

Eddy Kontelj is a proud Slovenian to parents who immigrated from Slovenia to Australia in 1958.

Prior to joining William Adams in 1999, Eddy spent over 15 years working in the Mining industry in some of the harshest environments throughout Australia and South America.

Eddy is also a current Director with the statuary regulatory authority the Game Management Authority.

Between March, 2010 and April, 2016 Eddy served the Geelong community as an elected Councillor with the City of Greater Geelong. During this time he held the portfolios for Aboriginal Affairs, Multicultural Affairs and Finance.

Eddy has previously set two Guinness World Records (2002 & 2007) for the ‘Longest Static Cycling Marathon’. During these two world record campaigns he also raised awareness and funds for the Asthma Foundation and beyondblue: the national depression initiative.

Between November, 2016 and January, 2017 Eddy travelled to Antarctica to complete a traverse from Dumont d’Urville Base Station to the Concordia Scientific Research Station in Dome C Antarctica with the French Polar Institute and the Italian National Antarctic Program.

Eddy is happily married to my wife Maria since 1998 and is Father to three beautiful daughters Kirra, Macy and Mia who are also Slovenian Citizens.