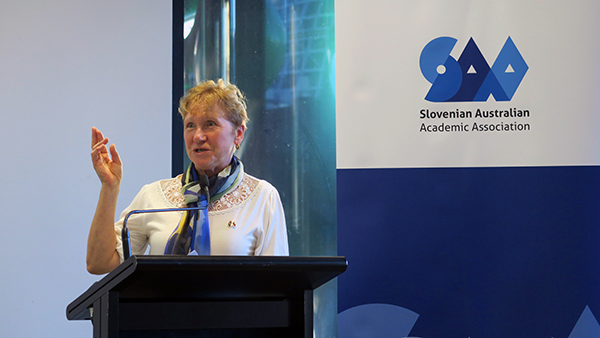 The aim of this online publication is to enlighten readers and the general public of the contribution made by Slovenians to Australia as a then developing country in the post WWII years until present.

Alongside all other immigrants at that time, Slovenians worked on major schemes and projects designed to bring Australia into the 20th century. This young country, full of promise of a bright and prosperous future, was offering freedom and opportunity for those newly-arrived from war-torn countries.

Content of the web portal among others includes personal stories of migration and settlement, past and present Slovenian Radio programs in Australia, Slovenian traditions kept alive in Australia, Slovenian Associations and organisations in Australia, Exceptional Slovenians in Australia: cultural workers, medical practitioners, lecturers and high school teachers, notable politicians, notable entrepreneurs, artists, writers and poets, musicians, sports achievers, performers and dancers. So far over 200 web pages is published with many in preparatory stage and even more planned.

The main sponsor is The Office for Slovenians Abroad with some smaller contribution as donations. The portal is archived annually by the State Library of Victoria and National Library of Australia, Canberra (Pandora) and NUK (National University Library) in Ljubljana.

Draga Gelt OAM (Order of Australia Medal) was born in Slovenia and arrived in Australia in 1968. By profession a primary school teacher, employed by Monash University as a computer aided cartographer and graphic artist. Worked voluntarily in ethnic schools since 1969; teaching language at primary and secondary levels; as well as establishing and teaching private adult Slovenian language classes since 1998. Organised and coordinated cultural programs with a theme and symbolism at Slovenian Association Melbourne, the Slovenian Religious Centre in Melbourne, Slovenian Youth concerts in Adelaide, Geelong and Canberra; led and taught folk dancing groups; wrote the narratives and some comedy scripts, as well as directing drama groups.

Is a webmaster of Slovenians in Australia and Museum of Australia, (Victorian Collection): Slovenian Association Melbourne. She is also an award-winning artist – receiving the First Prize at the U3A Knox Art Exhibition 2016.

Draga has published 18 books in print and online throughout the years about Slovenian history, culture, traditions, art, children’s books, poetry as well as contributed to various books on language, children’s’ games, history and Slovenian studies.